What If It’s Us | Sticky Note Review 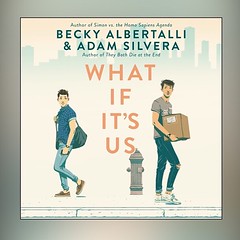 I knew, as soon as I heard that Becky Albertalli and Adam Silvera were writing a book together that I was going to read it. I had a feeling it would be a fluffy love story that I’d love every minute of because I love rom coms (and I’m less embarrassed about admitting it than I used to be).

Here’s your summary (from Goodreads)

Arthur is only in New York for the summer, but if Broadway has taught him anything, it’s that the universe can deliver a showstopping romance when you least expect it.

Ben thinks the universe needs to mind its business. If the universe had his back, he wouldn’t be on his way to the post office carrying a box of his ex-boyfriend’s things.

But when Arthur and Ben meet-cute at the post office, what exactly does the universe have in store for them?

Maybe nothing. After all, they get separated.

Maybe everything. After all, they get reunited.

What if Arthur tries too hard to make it work . . . and Ben doesn’t try hard enough?

What if life really isn’t like a Broadway play?

But what if it is?

Yup. So I requested the library purchase the audiobook, which they did (obviously), and I was at the top of the holds list. It was good timing too; I was only reading with my ears last week as I wrapped up second revisions of my dissertation proposal. And it was exactly the right speed for me – I needed something light to contrast the heavy of my writing. If you haven’t already guess how I felt about this book, here’s my review.

#SNRtbs What If It's Us by Becky Albertalli and Adam Silvera. I think this book came at the right time for me. Dealing with a number of heavy things, it was nice to listen to a romance with two adorable boys, a meet cute (I'm a sucker for all that), and a fun story. Albertalli and Silvera’s voices shone through — Silvera’s especially (I watch his Instagram stories). If you’re in the market for a light mlm romance novel that reminds you of the best of 90s rom com (but with boys), look no further.