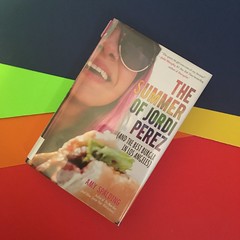 The Summer of Jordi Perez wasn’t even on my radar until I saw it in my Instagram feed. And then again face-out at the library. With that Julie Murphy endorsement, I knew it was a book I absolutely had to pick up.

Last summer, my summer romance was When Dimple Met Rishi. I expected that From Twinkle with Love would be my favorite this summer. I think that was partially because I hadn’t planned to read any other YA romances this summer.

The The Summer of Jordi Perez came along and I fell in love with is so much. I think what put it over for me was the level to which I identified with Abby. I mean there are some very clear differences between the two of us, but the way she lifts other up while simultaneously ignoring her own advice is something I’m super familiar with. That’s not the only thing, but it’s definitely the most salient for me. 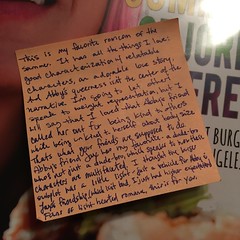 The Summer of Jordi Perez is my favorite rom com of the summer. It has all the things I love: good characterization and relatable characters, an adorable love story, and Abby’s queerness isn’t the center of the narrative. I’m going to let others speak about weight representation, but I will say that I love that Abby’s friend called her out for being kind to others while being unkind to herself around body size. That’s what your friends are supposed to do for you. Abby’s friend Jax was my favorite character – a dude-bro who wasn’t just a dude-bro, which speaks to how these characters are multifaceted. I thought the burger subplot was a little light; it seemed like it was just a vehicle for Abby and Jax’s friendship (which isn’t bad, I just had higher expectations for it). Fans of light-hearted romance, this one is for you.