This Darkness Mine | Sticky Note Reviews

I picked up This Darkness Mine because I saw it on a list somewhere in the Bookternet.  I think it might have been on a list of books to read before the end of 2017. No one I knew read it. Usually that’s a big red flag for me, but I decided to charge forward anyway.

This Darkness Mine is your typical good-girl-gone-bad type of story.  Here’s the synopsis from Goodreads:

Sasha Stone knows her place—first-chair clarinet, top of her class, and at the side of her oxford-wearing boyfriend. She’s worked her entire life to ensure that her path to Oberlin Conservatory as a star musician is perfectly paved.

But suddenly there’s a fork in the road, in the shape of Isaac Harver. Her body shifts toward him when he walks by, her skin misses his touch even though she’s never known it, and she relishes the smell of him—smoke, beer, and trouble—all the things she’s avoided to get where she is. Even worse, every time he’s near Sasha, her heart stops, literally. Why does he know her so well—too well—and she doesn’t know him at all?

Sasha discovers that her by-the-book life began by ending another’s: the twin sister she absorbed in the womb. But that doesn’t explain the gaps of missing time in her practice schedule or the memories she has of things she certainly never did with Isaac. As Sasha loses her much-cherished control, her life—and heart—become more entangled with Isaac. Armed with the knowledge that her heart might not be hers alone, Sasha must decide what she’s willing to do—and who she’s willing to hurt—to take it back.

Edgar Award–winning author Mindy McGinnis delivers a dark and gripping psychological thriller about a girl at war with herself, and what it really means to be good or bad. 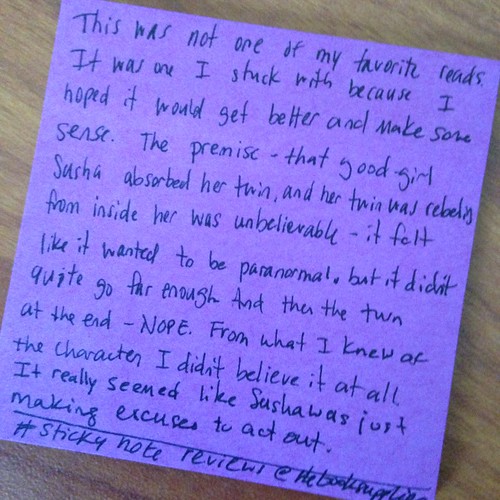 This was not one of my favorite reads. It was one I stuck with because I hoped it would get better and make some sense. The premise – that good-girl Sasha absorbed her twin, and her twin was rebelling from inside her was unbelievable – it felt like it wanted to be paranormal, but it didn’t quite go far enough. And then the [spoiler redacted] end? — NOPE. From what I knew of the character, I didn’t believe it at all. It really seemed like Sasha was just making excuses to act out.

Have you read this? If you liked it more than I did, let me know why.