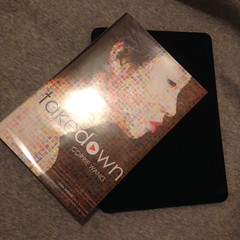 The first time I ran across The Takedown, it was at the bookstore in Indianapolis. It was face out, and the cover caught me right away. I’m always drawn to photo collages, mainly for composition reasons. I find pictures within a picture to be fascinating. So score one for cover design.

In The Takedown, protagonist Kyla Cheng is practically perfect in every way. She’s on her way to being valedictorian, she’s created a service club, she’s (not) dating the cutest guy in school. She wants to graduate, go to college, and someday become president. But someone posts a video of someone who looks like her in a compromising position with a teacher, so those admissions dreams are on hold until Kyla can figure out who set her up and get her life back. 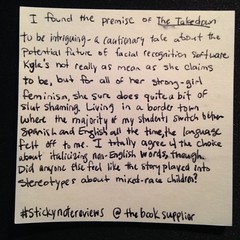 I had some thoughts. The sticky note says:

I found the premise of The Takedown to be intriguing – a cautionary tale about the potential future of facial recognition software. Kyla’s not really as mean as she claims to be, but for all her feminism, she sure does quite a bit of slut shaming.

Living in a border town where the majority of my students switch between Spanish and English all the time, the language felt off to me. I do totally agree with the choice about italicizing the non-English words, though. Did anyone else feel like the story played into stereotypes about mixed-race children?

I want to expand upon my comment about the fetishizing of mixed-race children for a second. I think this is particularly close to my heart right now because if T and I end up having a kid the natural way, our kid will be mixed-race. I hate the idea of my child being fetishized for something they have no control over. The way the narrative is written, the pushback against these stereotypes was simply to say that almost everyone, because it’s set in the future, is mixed-race. That didn’t do it for me, as a reader. I am aware, however, that this response is filtered through my own feelings as someone who is trying to become a parent.