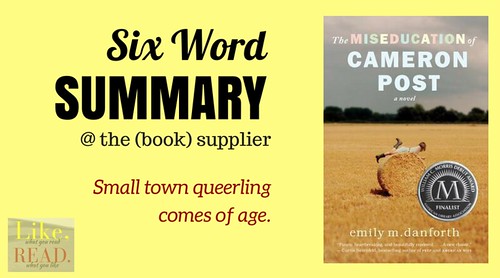 Let’s take a look at the beginning of the novel, in Book Beginnings hosted by Rose City Reader.

The afternoon my parents died, I was out shoplifting with Irene Klauson.

Mom and Dad had left for their annual summer camping trip to Quake Lake the day before, and Grandma Post was down from Billings minding me, so it only took a little convincing to get her to let me have Irene spend the night. “It’s too hot for shenanigans, Cameron,” Grandma had told me, right after she said yes. “But we gals can still have us a good time.

Now let’s get into the text a little. Here’s an excerpt from page 56 of The Miseducation of Cameron Post for The Friday 56, hosted by Freda at Freda’s Voice.

After Ruth came back, a moving van followed close behind; we had to make room for some of her stuff. This meant tackling the garage, closets, the storage shed in the backyard. During one of these clearing sessions we unearthed a dollhouse my father had made for my fifth birthday. As dollhouses go, it was amazing. It was a built-to-scale reproduction of some big old Victorian in San Francisco–according to my dad, it was a famous one on a famous street.

I started The Miseducation of Cameron Post on Wednesday, so I don’t have major insight into plot yet; I’m still in the exposition. In the opening scene of the novel, Cameron Post is shoplifting. At this point, because she also stole something earlier on page 56, I wonder if this is something Cameron does throughout the novel that is just part of her character. I also wonder, given the framing of the statement, to what extent she blames herself for the death of her parents. Is her mentality, “If I hadn’t been doing this bad thing (or these “bad” things), my parents might still be alive”?

I can tell that Cameron has reverence for her father’s craftmanship. That she keeps the dollhouse, even though she’s too old to play with it, could be a sign of her grief – holding on to things that her parents gave her or created for her because she’s not quite ready to move on.

From summaries of The Miseducation of Cameron Post that I’ve read, I know that Cameron’s aunt, Ruth, has some coming to Jesus moments with Cameron, and I’m interested to see how that plays out.

Connect with Cameron: Have you ever felt like you weren’t accepted in your community for who you really are?