I recently finished American Street by Ibi Zoboi, which is the source text for my Friday Linkups (on Sunday).

Let’s start with a Six Word Summary, in case you haven’t heard of this book yet. 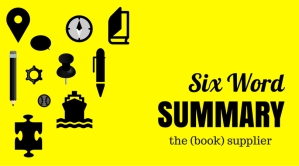 Now this summary is an understatement, to say the least, but at least it gives us a place from which to begin.

Now that we have the basic gist of the story, let’s take a look at the beginning with Book Beginnings hosted by Rose City Reader.

“If only I could break the glass separating me an Manman with my thoughts alone. On one side of the class doors are the long lines of people with their photos and papers that prove that they belong here in America, that they are allowed to taste a bit of this free air. On the other side is me, pressing my forehead against the thick see-through wall. My shoulder hurts from the weight of the carry-on bag. I refuse to put it down for fear that they will take it away too. “

Wow.  That’s a heavy place to start. I can’t imagine what it’s like for Fabiola (our protagonist) to be separated from her mother as soon as she enters the country. Though I’m sure anxiety around border crossing is something many of my students have experienced. I’m hopeful, upon recommending this book to some of them, that they can make similar connections, seeing that it’s not only people on the US/Mexico border that have issues with immigration.

And now, because we can’t help but jump ahead, let’s see what page 56 has in store for us with The Friday 56, hosted by Freda at Freda’s Voice.

“I do as she says. She takes the Bible and pats the spot next to her on the bed. I sit beside her and feel her warm arm against mine. It almost feels like my mother’s. Almost.”

So we now know that Fabiola’s not reunited with her mother by page  56 (and as this is a major plot point, boy, would I hope not).

I went back and forth between the audiobook and the physical book on this one. I’d be interested to know, if anyone’s from Haiti and has heard the audiobook, about the accent Robin Miles affects. I love her as a narrator – and her ability to do voices – but I wonder what people think about #OwnVoices for audiobook narrators. Though to be fair, some of the characters are American and speak with an American accent, so… I find this to be complicated. I don’t know where I land.

What do you think about audiobook narrators affecting accents from different places?