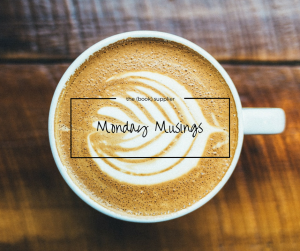 Happy Monday everyone. This is Monday Musings, posts in which I talk about things that are not books (but are sometimes related to books). Today, though, is not about books, so if that’s not of interest to you, it won’t hurt my feelings if you stop reading here.

Today’s is about an exchange I was involved in on Twitter about allyship.

I just don’t have it in me to try and teach those who self-identify as “allies” but really aren’t. You annoy the hell out of me & I’m tired.

To which I said, “I think you may have missed the point.” He disagreed.

I thought about a presentation I went to last week where a transman, who does education around issues facing transgender people, said that there are certain people in certain situations he doesn’t feel like he should have to educate. Like his doctors when he goes in for an appointment, for example.

There are plenty of opportunities for people to educate themselves. I suggested utilizing Google, though a healthy amount of media literacy is also required for this particular method. But there are trainings, too. Find non-profit organizations that do community outreach and connect with them. There are people who are willing do the educational piece. But that doesn’t mean individuals cannot use their own agency to get started, rather than waiting on someone from the marginalized group to tell them what to do.

I imagine that for some, it’s exhausting to have to both fight and educate at the same time.

And if an individual wants to be an ally, great! We need more allies. There are groups for which I am an ally, and it’s my responsibility to educate myself, and ask meaningful questions. I think it’s unreasonable to expect people who are fighting for equal treatment under the law to stop their fight to answer the questions that it would be easy for me to answer myself using a Google search and reading a number of responses.

So the point is agency and initiative.  Sounds simple. In reality, it’s much more nuanced and complicated that I expressed here.

Tomorrow, back to our regularly scheduled book stuff. I hope you’ll stay with me.