Last week I didn’t write a Recently Added because we were stuck in Portland. We made it home before the really heavy snow hit. I didn’t blog at all last week because I was trying to catch up after missing three days of work. I’m almost there, but I thought I’d pop in and tell you what I’ve added to my TBR recently. 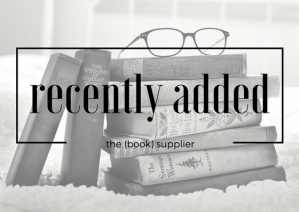 The Upside of Unrequited by Becky Albertalli about love, the fear of rejection, and identity.

Why I added it: I love (and just reread) Simon vs the Homo Sapiens Agenda (Review), so naturally I want to read more from Albertalli. This one won’t be out until April, so I have a little while to make a dent in my TBR.

Girl Mans Up by M-E Gerard about the difference between gender expression and gender identity, and what it really means to be respectful and loyal.

Why I added it: I find the conversation about how gender identity, gender expression, and sexuality interesting. I especially like to see those conversations in young adult novels.  The audiobook is already on hold at the library.

Furthermore by Tahreh Mafi, an adventure fantasy about a girl’s search for her lost father (who disappeared with only a ruler).

Why I added it: Since I enjoyed Shatter Me, I thought I’d give this one a go as well. One of my Goodreads friends said it reminded her of The Girl Who Circumnavigated Fairyland in a Ship of Her Own Making. I enjoyed that one too, so I’m good with such a comparison.

Boy Robot by Simon Curtis about a boy who finds out that he’s a synthetic human and is scheduled for termination.

Why I added it: This is one that I saw when we were at Powell’s in Portland. I think I have a thing for books about identity, and this seems like it’s kind of a take on the foundling story, so I’m intrigued.